Silica fume can be used either as a densified or undensified powder, a slurry, as combination at the concrete mixer, or part of a factory-blended cement.

Generally, the comparisons are made against a concrete made with 100% CEM I (Portland cement). 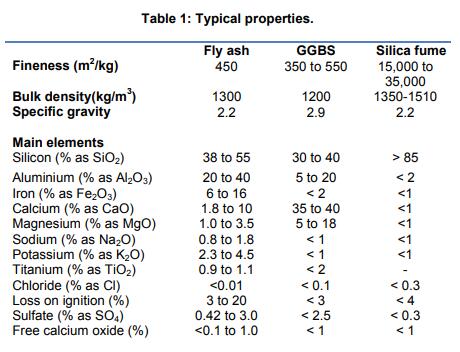 Cementitious Properties
The materials differ in their chemical reactivity. GGBS is a latent hydraulic binder, i.e. when mixed with water, it slowly sets and hardens. With GGBS alone, the rate of hardening is relatively slow and for normal concrete applications, GGBS needs to be activated by combining it with CEM I. Fly ash and silica fume are pozzolanas, i.e. they do not react with water alone but do react chemically with the calcium hydroxide produced by the hydration of CEM I to form calcium silicate hydrates (C-S-H) which bind the concrete together. Limestone is chemically, relatively inert but limestone fines, because of their fine particle size, can contribute towards strength by a physical, void-filling mechanism. There is evidence that fine calcium carbonates act as nucleation sites, accelerating the hydration of CEM I, improving early strength development.
Silica fume is a highly reactive pozzolana that converts all or most of the liberated calcium hydroxide to C-S-H
As a result of their chemical reactivity and also fineness, the materials differ in the proportion of the cementitious content at which they can be used, with indicative proportions being:
– GGBS typically 50% but can be up to 70% or more
– fly ash typically 30% but can be up to 50% or more
– limestone fines typically 15% but can be up to 20% or more
– silica fume typically <8% but can be up to 12.5% or more

USE IN CONCRETE
Silica fume can either be added separately at the concrete mixer, where they are referred to as additions or else be incorporated into a factory-produced composite cement. The following sections describe the way in which Standards deal with these two alternative approaches and the relative merits and practicalities.

BS EN 13263, Silica fume for concrete
Each of these standards has two parts:
– Part 1: Definitions, specifications and conformity criteria
– Part 2: Conformity evaluation
Within BS EN 206-1, additions may be used under the k-value concept, with the term water/cement ratio being replaced by water/(cement + (k × addition)) ratio. Specific k-values are allocated for silica fume to BS EN 13263 and for fly ash to BS EN 450-1. However the k-value approach is rarely (if ever) used in the UK. Silica fume concrete is normally designed for high durability or strength characteristics and the BS 8500 recommended limiting values for cement content and w/c, are generally satisfied, even without taking the silica fume into account.

Generally chemical admixtures can be used with silica fume in the same way as for conventional concretes. Silica fume is normally used with a super-plasticiser. As is the case for OPC cements the performance of admixtures may depend upon the properties of the individual source of the cementitious material and tests should be carried out to establish the appropriate dosage levels.
To maximise the full strength producing potential of silica fume in concrete it is recommended that it should always be used with a dispersant admixture such as high range water reducing agent. The dosage will depend on the amount of silica fume and the type of admixture used. The dosage of air-entraining admixture to produce a required volume of air in concrete usually increases with the amount of silica fume. The amount of silica fume and the type of mixing were found to have no significant influence on the development and stability of the air-void system.

WATER DEMAND
Silica fume can be expected to produce an increased water demand, which is normally countered by the use of admixtures.
The water demand of concrete containing silica fume increases with increasing amounts of silica fume, This increase is caused primarily by the high surface area of the silica fume. To achieve a maximum improvement in strength and durability, silica-fume concrete should contain a high range water reducing admixture.

WORKABILITY/CONSISTENCE
Fresh concrete containing silica fume is more cohesive and less prone to segregation than concrete without silica fume. Experience has shown that it is necessary to increase the initial slump of concrete with silica fume by approximately 50mm above that required for conventional CEM I concrete to maintain the same apparent workability. Silica fume addition has been used to assist in pumping long distances, especially vertically. Concrete was pumped in single operation to a height of 601 metres at the Burj Khalifa project in Dubai; so far the world’s tallest building. 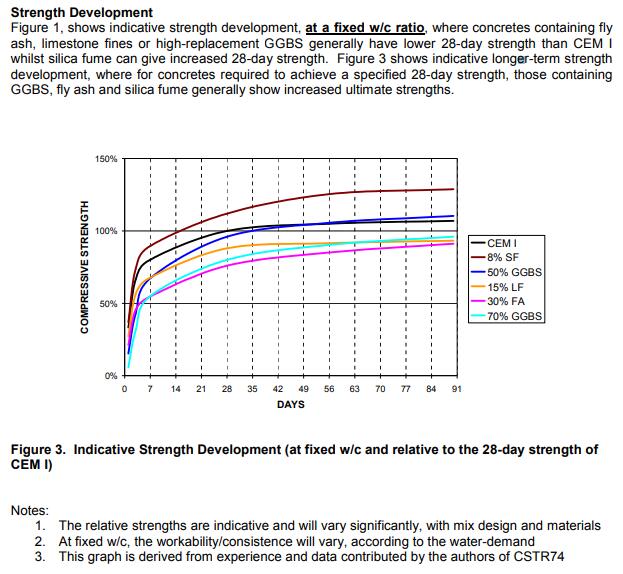 Concrete made with silica fume follows the conventional relationship between compressive strength and w/c but strength is increased at a given w/c ratio when silica fume is used. High early compressive strength (in excess of 25N/mm2
at 24 hours) can be achieved. With proper concrete design, very high 28-day strengths can be produced, using normal ready-mixed concrete plants and in the USA and Asia 100–130N/mm2 concretes are used in tall buildings. Cementitious contents are generally > 400 kg/m3 and w/c in the range 0.30 to 0.40. An example in South East Asia is the new 79 floor East Island Centre in Hong Kong where the volume of concrete was reduced by 15% through the use of Grade 100 MPa self-compacting concrete. Not only were there significant sustainability benefits but also the client benefited commercially through the additional floor space opened up for rental in this expensive part of Hong Kong. 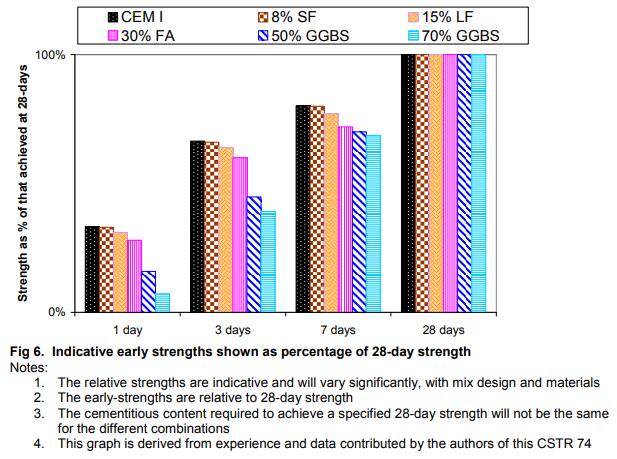 EFFECT ON CONCRETE DURABILITY
Permeability
Silica fume can produce very large reductions in water permeability of up to one order magnitude or more, depending on the mix design and dosage of silica fume.

SULFATE RESISTANCE
Sulfate attack of concrete occurs through both chemical and physical processes. Two main reactions are involved, these being the reaction of sulfate ions with hydrated calcium aluminates forming ettringite, and the combination of sulfate ions with free calcium hydroxide forming gypsum. The first reaction is of more practical significance. Considerable increases in volume result from both reactions causing expansion and disruption of the hardened concrete. More recently, a second form of sulfate attack, called thaumasite attack has been recognised as a problem after the discovery of its effects on the foundations of some motorway bridges in the UK. Thaumasite is a calcium silicate sulfo-carbonate hydrate, which forms at temperatures below 15°C by a reaction between cement paste hydrates, carbonate and sulfate ions. Its formation reduces the cement paste to a soft mulch. Unfortunately, conventional Sulfate Resisting Portland Cement offers no protection against the Thaumasite form of sulfate attack. GGBS, fly ash and silica fume can substantially increase the resistance to both forms of sulfate attack compared with CEM I concrete.